Grateful acknowledgement to Phil and Judy DuFresne ( Big Bear and wife ) for all their years of heart and dedication in making the Corbett Fun Fest what it is today! Thank you also to the many others who so willingly have supported this community celebration of the Fourth of July. If you would like to get involved this year, please select here!

A history of the Corbett Fun Festival

Written by Clarence Mershon in 2011

The first Springdale-to-Corbett parade actually was in 1970, on Halloween. Bob’s and Nevalin “Nev” Scott’s daughter, Cris, belonged to a 4-H club that taught the care and training of horses. Cris, with club members Nita Graff, Linda Guest, Sara Johnson, Rene Ryan and “the Harris boy,” decided that an exciting culminating event for the year would be a parade to show off their horses and demonstrate their skills. Bob and Nev took care of the details and it happened! No permit of course! It was such a hit that people in the community thought it should continue. “That’s Corbett,” Nev commented. 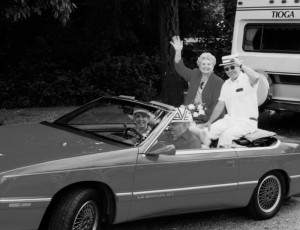 The North East Multnomah County Community Association (NEMCCA) took up the idea, prompted by board member Bea Graff, and the festival was born. Though a group of people got together and made it happen, no specific individual(s) were in charge. Bill Quinn and Patti Graff took major responsibility initially. For the events first years, “celebrities” were selected to be the Grand Marshall. That soon changed. NEMCCA decided to recognize individuals in our midst who have made a significant contribution to the community. One of the first local honorees was Bea Graff.

Thus, a group of volunteers launched what has grown into a spectacular community event that attracts thousands of visitors each year. Initially, fund raisers, such as the Kiwanis salmon feed (supplanted by the Kiwanis sponsored dinner), the Fireman’s Ball at the Grange Hall, the Christmas party and other activities were used to raise the funds needed. “Usually we made enough to pay the bills, but if not, we and our volunteers considered it a “donation,” Nev recalled. “In the mid-1980s, Mary Cohorst, director of the Springdale Center, got the job corps involved, which was a real plus. She was a great leader.” The Scotts were involved with the fun festival for 25 years. Their participation and work culminated in their co-workers’ recognition of their efforts by choosing them to be the Grand Marshalls of the 1995 parade. 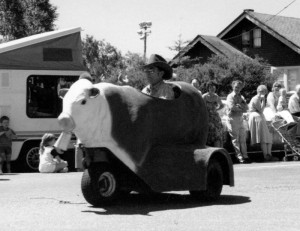 “Without the volunteers of Fire District #14, there would be no parade,” Nev asserted. “District #14 equipment operated by District volunteers has led the parade from its start.” Another individual Nev recognized was Bill Quinn, who acted as Master of Ceremonies until his untimely death. “He was just outstanding. He knew the folks, and he had a way with words that encouraged everyone. He is sorely missed.” Nev credits Dee Sheehan, former owner of the Corbett market, for the introduction of fireworks. That got to be such an expense, however, that the display was discontinued when raising the necessary funds became such a hassle. When Phil DuFresne, owner of “Big Bear Market,” whose involvement with the festival dated to 1978, volunteered to take the leadership responsibility, everyone felt relieved. He quickly sought the help of Susan Leigh, new owner of the Corbett Country Market, as co-director.

In 1998, DuFresne and Leigh started with a balance from the previous year of $98.00, with lots of faith that the community could raise sufficient funds to renew the fireworks display. A “great group of volunteers” put together a series of events, including spaghetti feeds, dances, a Christmas program and others, about ten in all, to raise the needed funds. The first auction, “brilliantly organized by Diane Baird,” DuFresne related, brought in sufficient funds to cover the bills and provide a good start for 1999. DuFresne recalled, “Diane went all over the country to get items for that auction. It really payed off!” The cost in 1998 was near $15,000. The budget for this year’s festival is $60,000.00.

The festival’s scope and growth in the past twelve years has been phenomenal. This year’s ( 2011 ) program will feature the music of Justin ‘Shander (winner of the Graceland-sanctioned Elvis Tribute Artist Contest). Also appearing are Random Pressure, Ray Sanchez (Buddy Holly impersonator), Philip Bauer (Neil Diamond and Johnny Cash impersonator) and the musical group, Stone In Love (Journey Tribute Band). A supervised Fun Zone provides activities for children and, of course, the culminating event, fireworks. This 40th year celebration, featuring the “largest small-city fireworks show in Oregon,” according to DuFresne, expects to draw an estimated 15,000 visitors. The two individuals most observers would credit with the outstanding growth and success of this event are Phillip DuFresne and Susan Leigh. Their leadership, organizational skills and charisma have caused fun festival to blossom. Each, however, dismisses their contribution, attributing its success to the other’s leadership. DuFresne praises Leigh for her ideas and inspiration while Leigh praises DuFresne for his commitment and hard work. However, both credit a legion of volunteers who, over the years, have made a vital contribution to the festival’s success. 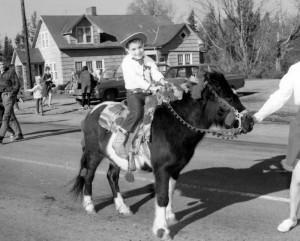 Both DuFresne and Leigh emphasized the goal of Corbett’s Fun Festival. “We wanted it to continue as a family-centered event, an attraction for parents and their kids,” DuFresne remarked. “Last year I got a call at home from a youngster, probably 10 or 11 years old, who thanked me! ‘Mr. DuFresne,’ she said, ‘Thank you for the festival. I had a great time.’ That’s what keeps me going,” he finished.

The fact that the festival is so family oriented has attracted about 50 Multnomah County Sheriff deputy volunteers. Each year they establish a command center on the grounds, bring their families and work a shift while their families enjoy festival activities, including the Fun Zone. DuFresne described the cooperation of state and local governments as “fantastic.” “They appreciate the fact that the festival attracts thousands of families and is community-centered. They are totally supportive.”

DuFresne and Leigh re-iterated the praise of others involved. Fire District 14 leaders and personnel have provided equipment, volunteers and direction, from the festival’s first year to the present. Both DuFresne and Leigh spoke in glowing terms of the contributions of various fire district chiefs and firefighters, volunteers without whose participation the festival could not survive. Both cited the present Chief, Tom Layton, for his tireless participation and support through the festival’s growth. And, concluded DuFresne, “The organization now gets the required permits.” 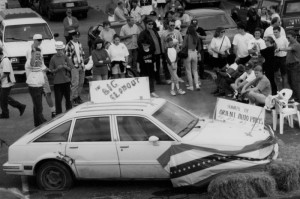 All involved in the fund raising, preparation and work of putting this magnificent event together hope that spectators and participants will enjoy this, the 40th year celebration – and the 41st annual parade.

Note: Corbett had at least one earlier parade – to celebrate Oregon’s centennal year, 1959.

The roads close at 9:30 am into Corbett on the 4th of July. The roads re-open after the parade around 12:00PM (noon-ish)

All bicycles must be registered for the parade with a number to be on our closed highway. Parade participants must stay In middle of highway or they will be dismissed.